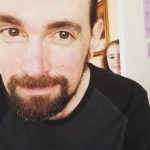 FROM GROWING UP IN a Protestant Christian household to exploring and experiencing many Ways including Buddhism, Shamanism, Paganism, New Age, Catholicism, and good old Life, LLOYD MATTHEW THOMPSON has clearly been shaped by each path in many ways. As the oldest of nine home-educated children, he became accustomed to a self-motivation and independence that drives him to this day, even when surrounded by opposing influences. Whether writing, painting, drawing, or teaching, Lloyd has committed to and strives to embody and exemplify the mantra he has found at the heart of all things: And the bottom line is Love.

Lloyd Matthew Thompson has written for various metaphysical and holistic blogs and magazines, both locally and globally. He is the author of the nonfiction books THE ENERGY OF GOD, LIGHTWORKER: A CALL TO AUTHENTICITY and ENERGYWORKER: A CALL TO EMPOWERMENT, as well as the fiction works THE HEALER: A NOVEL, ROOT, and AURA: A SHORT STORY. Lloyd is currently working on a modern translation of Shantideva’s Buddhist classic Guide to the Bodhisattva’s Way of Life and a new yet-to-be-titled novel.

Lloyd lives in Oklahoma City, Oklahoma, with his wife, his seventeen-year-old triplets, his ten-year-old daughter, and his two cats named Akasha (the vampire queen) and Buffy (the vampire slayer). One can simply imagine how those two four-leggeds get along.