Ladies and Gentlemen! I would like to present you with an excerpt from The Energy of God, which is now available on Amazon worldwide in both paperback and Kindle eBook. Find it on Amazon here.

The Energy of God is a call to end the discrimination, end the hatred, end the separation; a call to be the mediators, be the healers, be the love. My prayer for this book is that it finds its way to all the perfect places, finds its way into the hands of all who need love, healing, and encouragement. May every chain be broken, every bridge be restored, and every heart be set free! 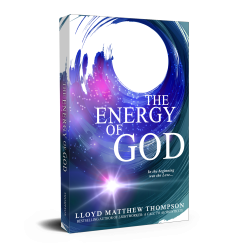 Excerpt from The Energy of God:

As I look around our present-day world, it seems that we, too, shout and clamor for external, surface-level changes without examining anything deeper, without first acknowledging what is floating within. How much has truly changed with each switching of our leaders and politicians and in passing more and more laws and rules and restrictions in an effort to create change by sheer force alone?

No matter how often Yeshua had explained things to the people of his time, they still did not understand it was not a physical liberation he meant to set in motion. In both straightforward speech and in teachings wrapped in storytelling, he had made every effort to communicate deeper truths to people, to set them on the journey that would begin to open their eyes and minds. It was not the physical, outer ways of life and circumstances he worked to see changed, but the inward, personal ways of life. Yeshua understood that if a system was simply conquered by and replaced with another system, that would still be just another system, like only replacing one bad habit with another bad habit, leaving the internal motivations and influences untouched, unchanged. Simply cleaning the outside of a cup does not clean the inside as well, he told them, but if you clean the inside of the cup first, then the outside will naturally be washed in the process. Then both the inside and the outside will be cleaned. Surface changes and bandages were not what was needed to free them from suffering—nor is it what we need here and now.

It was these unfulfilled expectations and disappointed hopes that would drive these same people now calling for his crowning in joy to shout for his death in anger before the week was finished.

The way to bring about change is not to bash the undesired thing over the head to force it into a new shape. The most effective way to undermine an existing habit or system and begin a change is to dig to deeper and deeper levels—the root causes and influences that are driving and sustaining the system in the first place. Once these driving forces are unveiled, a remedy can then be intentionally applied to it, until it eventually replaces the undesired. This is how separation begins to be coaxed into connection.

What Yeshua taught was love, plain and simple. This was the kingdom of God he demonstrated. He knew that if the hearts of people could be softened and turned toward one another, the harmful problems that caused such separation would be realized and begin to naturally sort themselves out over time. He also knew he would not see immediate results; it would be an ongoing process over long periods of time.

When people are in the same boat, the differences between you and me, us and them begin to blur and disappear. The differences between God and human begin to blur and disappear. How can you harm someone you are face to face with on common ground? Yeshua taught that to love and protect others the way one would love and protect oneself or one’s closest family members summed up all the hundreds of laws and rules and rituals they had been trying to live up to, to assure they were good people.

Though he did not agree with or approve of many of the circumstances of the time, it was ultimately not the physical suffering he aimed to change, but the suffering created by their separation from God, from each other—from love: the love that is God. The love that is everything. He knew if they could find and begin living as the boundless love that is the energy of God, their connection and unity with each other and all things would also be reestablished, saving them from the hell of the suffering they endured. Except in the case of A Christmas Carol‘s Ebenezer Scrooge, change like this rarely happens immediately—it requires far-sighted effort and patience.

Yeshua did not recommend or direct anyone to rebel against the existing system; he only encouraged them toward love, kindness, and unity. Anything else would take care of itself. He knew love spreads, person by person, until it becomes an unshakable movement and begins to uproot the system from the inside out.

As he passed through the crowds that Palm Sunday, the burden of love he felt for each person he saw, each pair of eyes he looked into, overwhelmed him to tears. Like holding on to a prophecy of hope, the desire to ease and help end their suffering is what kept him going, even though he knew what it would do to him.

He was here to be love in this place.

He was here to be God in this place.

He did not come to change the society or the religion—he participated in both completely. He did not intend to create a new religion, especially not one based on himself. He taught to clarify centuries of misunderstandings. He acted only to demonstrate and embody the energy of God in tangible ways that others could see, feel, and recognize in their own spirits as their own source of strength, to show that they, too, can carry it forward, embodying the energy in their own lives.

Some said Yeshua was God come into a body to be with us. Yet he was no more God than they themselves were.

Some said he was only a man, a carpenter who happened to have excellent speaking skills. Yet he was no more just a man than they themselves were.

Both of these mean the same thing: we are all God.