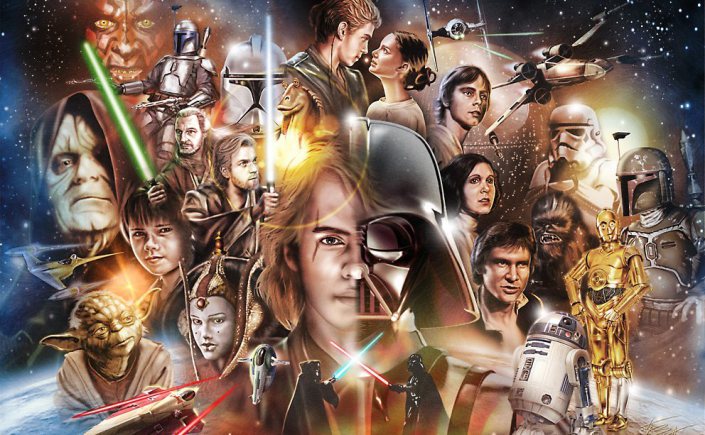 I find that these days, I am very interested in origins—not only the stories about what someone did, what they’re known for, but I want to know about HOW they got to what they are known for… what led them to make the decisions that led to the result?

In part, I blame my wife Melissa and her master people-reading skills she combines with her psychology degree in her drive to delve deeper and deeper into an event or circumstance, searching for the roots and core.

In part, I blame my own age. I’ve somehow grown up despite all kicking and screaming (maybe I can blame my daughter for that one—no wait, she always reminds me TO play and relax and enjoy life for the sake of life) and fallen even more in love with stories, which I see naturally led to a deeper curiosity into the HOWs.

I refused to acknowledge the three Star Wars sequel/prequels (Episodes I, II, and III) for years and years. But now, when I sit my children down for an all-six-movies-in-order marathon (like any good father would) and see the continuity of the epic story as a whole, I have found I not only appreciate the background origins we see unfold that led to the original Star Wars trilogy I was raised on, but I actually do love it as well! Shock and horrors, and all that jazz!

But I find it IS an important story to tell as well—otherwise, there’s just this Darth Vader dude flying around tearing crap up with no background info until we find out he is somehow Luke and Leia’s father, which still doesn’t explain much. Yet how powerful is it that we now know the heart of Padme Amidala and her struggle as she fights in Senate for all living beings with all she has, to prevent the corruption she sees her world tumbling to with one bad power-hungry decision after another—and then we find that she becomes the lover and wife of Anakin Skywalker, mother of Luke and Leia, AND the roundabout cause in Anakin’s attached and fearful mind that pushes him into fully becoming Darth Vader, implementing the very thing she dedicated her life to fighting?! SUCH a tragic story!

And then Padme’s final gifts of Luke and Leia grow up, and the story reaches a full circle with even Anakin/Vader finding redemption in his final hour, and ultimately proving to be the Chosen One bringing an end to the Empire after all—BY TAKING RESPONSIBILITY FOR HIS ACTIONS, FACING HIS CHOICES SQUARELY, AND OWNING THEM. He remembered himself, and saved the world, just in time.

I can only giddily imagine what sort of progress we’ll see this Christmas when Star Wars Episode VII releases. Its title THE FORCE AWAKENS suggests we will see a New Age has blossomed in that galaxy far, far away!

I really didn’t mean for this post to be all about Star Wars though. LOL!

I had already been thinking about all these things this morning, and then on my work break, I read in The End of Your World by Adyashanti:

“All delusions begin in the mind. All delusions are based on various ways we’re talking to ourselves and then believing what we are saying.

The key to unraveling any delusion, to seeing through anything that separates us, is to uncover its genesis. What are you telling yourself that is creating a sense of division…”

A majority of the time, origins prequels come out as sequels to works already done, in both the book world and the movie world.

I see it’s the same way with our works and habits we’ve formed.

In order to begin any sort of change, we have to start where we are, here and now, after the fact of what was done has been done, and then go back, tracing its origins, looking for the clues to uproot and allow the change to begin grafting in place.

I think—like books and movies—we have to get interested in the existing story now, to then want to know more of the story leading to the now.

And I think all this is tied together as part of waking up.

We suddenly find ourselves in the middle of a story, and have no idea how we got there. LOL—frogs in pots.

Once we find the prequel, we get to write the sequel!